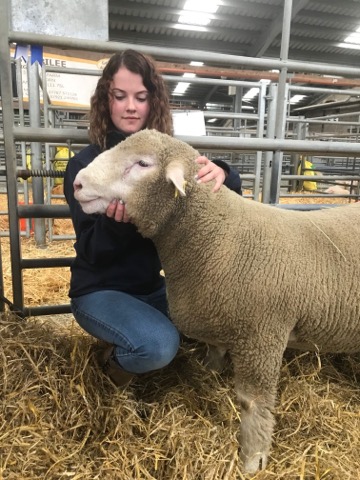 Congratulations go to Chloe Stewart of the Cala Flock who was announced the winner of the David Matthews Memorial Trophy at the recent Society Zoom AGM. The first Scottish winner of the award. The award is presented annually at the Society AGM to an enterprising young Dorset breeder. Every year one representative from Northern Ireland, Scotland, England and Wales is nominated for the award. The winner is picked by the President of the Society, based on a short summary of the flock owned by the young breeder along with their experiences and achievements so far.

Here is Chloe’s Dorset Journey so far and her winning report!

Before I start speaking about where it all started I thought I better introduce myself. I’m Chloe Stewart and I live in the very North of Scotland in Gills which is 5 miles from John O Groats, this makes me the furthest north registered flock in Britain (possibly the world!). To put it into perspective that’s approximately 726 miles north of the Head Dorset Office in England. I would like to start by thanking everyone in the Scottish Dorset Association for the nomination. It’s a huge honour and I am very grateful to be the first person to be put forward for Scotland.

The farm that I am based on has been in my family for 5 generations so we are used to the hardships that are faced from being so far North and the extreme weather that we can get. Although we are used to these hardships there is still frustration due to the issues we face. For example the distance away from slaughter houses and main breed sales. The nearest slaughter house is 111 miles south at Munro’s in Dingwall, with the nearest breed sale in Stirling which is 175 miles away. These distances increase haulage costs and usually include an overnight stay, which adds to the difficulties of making a general farm profit.

This is where the commercial 1st generation cross Dorset come in to their own, by producing both early finishing and better quality lambs catching a premium price earlier on in the year increasing profit margins. The soil on the farm is mostly clay based; this causes water logging and wet guttery fields. I was worried about the Dorset hoggs being wintered outside with their heavy wool coverage but much to my surprise, even though they liked to stay in the wettest area all winter and didn’t look their best (so black they turned themselves into coloured Dorset’s), they still thrived.

The farm consists of 120 acres with 70 arable type land and 50 hill. The best ground in the farm is a grade of 4.2 this means that we are capable of growing very little crops, due to this we tend to only grow a rape kale hybrid or stubble turnips as a break crop between new grass being sown. Livestock wise we have a small herd of beef cattle, poultry and about 150 breeding ewes.

At home with the low quality ground, we have found it more difficult to find a non-traditional breed of sheep to Caithness to thrive on what we had. I personally don’t believe in feeding large amounts of concentrates unless needed when grass is low or unavailable. This is where the Dorset was a perfect match.

When I’m not working at home I’m attend College at SRUC Aberdeen. I’ve just started studying my 4th and final year of my BSc in Agriculture which will be a challenge due to the pandemic. I’m very excited to start my dissertation that I hope to link to genetics and Dorset’s. It would certainly be a topic that I wouldn’t bore of! I was 13 when I was first told by a family friend that I shouldn’t follow anyone else and make my own mind up on what breed of sheep I like and is of interest to me.

In 2013 I decided to look into what pure breed I really wanted for myself. When searching online I came across the Dorset and was extremely interested. Therefore I went on the hunt and came across these 3 gimmers at the rare breed sale in Dingwall and instantly fell in love.

Luckily it was my birthday 5 days after the sale so thanks to my Mum and Dad my present was bought. At this point, I couldn’t afford a tup so that year so we decided to cross my 3 gimmers with the Suffolk. When lambing time came around we were very nervous about what Mum called a “cute fluffy sheep” could produce. As my favourite gimmer out the three started to lamb we stood back and watched as this chunky single ewe lamb popped out with no issues.  So as she started to lick the lamb I ran inside to the house to grab my phone for a photo and when I sprinted back out to the shed the lamb was already on its feet and making its way to the udder. It was at this point where Mum realised that my “cute fluffy sheep” were more than that.

The following year I managed to source a pure Dorset Tup and a few more ewes to add to my small flock. Between then and 2018 I was up to a total of 16 ewes, 2 of which were Dorset horns which I just ran with the polled tup. With only starting with 4 the numbers fairly started to creep up, this was between keeping all ewe lambs born and bought in a few each year from Smallburn farm through various sales. Due to the persuasion of Alistair Morton I decided to become a registered flock in 2018. 3 Since then the flock has expanded with currently 30 ewes, 24 of these being polled and the other 6 being Dorset Horns. The flock being improved by purchasing ewes for the Huish, Ballytaggart, Dun Eideann and Downkillybeggs flocks.

Last year I bought my first registered tup for the poll ewes. This was at the new Dorset Stirling show and sale and was the reserve champion tup lamb Dun Eideann Belveidere. The reason for this purchase was my ewes were becoming quite narrow and needed more depth and width about them. This tup looked perfect for this with his chucky attributes and style. Also seeing photographs of his sire, Sherborne Zodiac, I could see there was some brilliant breeding behind him.

As you’ve probably noticed the Dorset Horn numbers have increased (this wasn’t due to my hand accidentally waving at the mart). I was at Dingwall mart having a look at the Polled Dorset’s in the pens. Walking along I saw these 4 Dorset Horn ewes that caught my eye, and in a complete ‘begger it’ moment I decided to go for horned rather than polled. Once I had made my rash decision I then decided not to put the ewes to the tup until I found myself a good Dorset horned tup, so off they went out with the hoggs, with only hay and a very small amount of bruised barley. I was absolutely delighted to see how they maintained condition over the winter and when weighed in March they had actually gained 5kg.

Thanks to James from the Bennachie flock I managed to purchase High Rakes Anchor Man from the Reivers Flock. With nothing being easy living so far up north, we had to travel a roughly 350 miles round trip to pick him up. This came with another accidental purchase of a horned gimmer from the Dynamite flock and horned ewe lamb from the High Rakes flock. I dare say my horned flock was officially established.

I find the Dorset’s fit perfectly into our system for a few main reasons. Most importantly they are brilliant at utilising grass. When it comes to the commercial side of things we’ve found with the Dorset crosses they have definitely improved the maternal ability of our ewes. We’ve had very little issues with ewes not taking their lambs and if need be when a disaster does happen an adoption is easily done with no hassle. When thinking about what I’ve achieved so far with the Dorset’s I couldn’t think of much to begin with. But when I went though it I actually have achieved a fare bit which starts with winning Champion AOB Native breed at the Caithness County Show. This was such a huge achievement for myself due to the lack of knowledge of non-traditional breeds to the area and was extremely unexpected. It was also promoting the breed which personally I felt was most important thing. Since then I have continued to promote the breed at 4 Northern shows a year.

When Highland Sheep 2019 was held in Caithness I was able to promote the breed with my own pure and cross Dorset’s, along with the huge help from Denis and Declan Rankine and James Royan, without them it wouldn’t have been possible.

I have so many thoughts and ideas for the future that I think if I write them all out I would have a novel.
The main ideas that pop up in my head often is definitely expanding the Horned flock further and hopefully lambing in September with them as this is something that wasn’t viable with the Polled Dorset’s. This year we have decided to use my first and most precious stock tup on a quarter of our commercial ewes in order to have fat lambs off earlier. I would like to take this further by having cross Dorset’s lambing in the 3 times in the 2 year system with lamb boxes being made and sold locally. In my position of the Scottish Dorset Society Youth Ambassador I aim to promote the breed within Scotland especially to younger farmers and new entrants.

After writing this I’ve realised quite how passionate and how many aspirations I have about the breed. Something that I maybe wouldn’t have dwelled on if wasn’t nominated. I feel strongly that whoever was to win this would be deserving of with this award. Personally I would be in disbelief if I were to win with being such a small breeder in the far north.

Also to be recognised would be such a huge achievement for me and a great win for the newly established Scottish Dorset Society. It already feels like such an achievement to have been the first junior Scottish breeder to be nominated for this award. The trophy would take pride of place on the mantle place in my new cottage and the money would be used to go the AGM with my mother who has supported me thought this madness and string of rash but brilliant decisions.